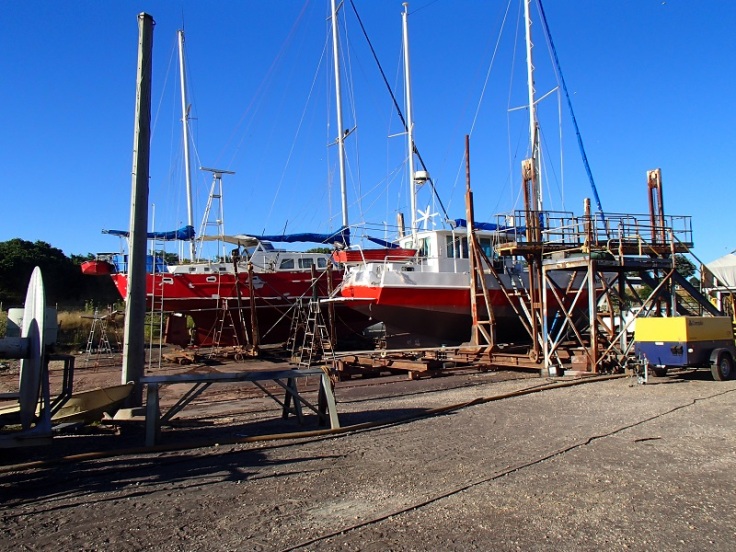 One of the surprises of boating life has been the other world / underworld of slipyards. There are curious similarities and curiouser differences.

Dogs… slipyards seem to have resident semi owned dogs. Bunbury took the prize with the wonderful dingo (see blog titled “preparing the Andante… or slipping a boat” . Albany came a close second with a three legged mangy bullterrier. (see blog titled Plan 37 b (i))  Devonport comes a slow last with a groomed and clean springer spaniel.

Corpses ….. mainly of the boat variety, but also piles of old machinery.

Here Albany was the clear winner with a whole cemetery of dead boats and accessories. There was a knackers boneyard of outboard motors piled up on the back wall of the shed, some buried deep into the sand of ages with hardly any discernible paint; and further up the pile you climbed, the brands became recognisable … Mercury, Yamaha, Evinrude, Johnson etc. and the blues, blacks, reds distinguishable. Masts and spiders webs of stainless steel rigging marked the perimeter of the yard. Some looked good enough to put straight back on a boat but mostly it was just more rubbish. Piles of ropes, stacks of planks or cut-out steel plates, nests of old caulking, mounds of discarded sails. Nothing useful any more but kept “just in case”. The yard held about 30 boats in varying states of disrepair, some returning to dust; others somewhere along the continuum of boat -dream.

Bunbury comes second here with a couple of totally buggered boats which no-one seems able to remove. One good looking 60′ Randall planing hull cray boat had been deserted complete with 2 brand new Cummins engines. The owner couldn’t pay the bills and had simply walked away leaving the boat in the yard. It had gradually been cannibalised and the only resident when we were there was a very dead swan. Bunbury also had a very unwanted squatter “doing up’ his boat. He had moved an old wooden boat on to land next door to the slip shed, then moved in, then moved a caravan in, then moved his cats in… and three years later no-one can evict him because he managed to put the boat on the boundary between the slipyard land, and council property.

Devonport has a couple of dying boats. Especially sad is the old Rita-K, a sagging, tired rotting old ply motor launch; who is hanging on to her pier with the last of her strength and ropes. It also specialises in a good collection of gangways which are gradually been overtaken by the wild fennel. An interesting collectible.

Operators…. slips definitely attract characters. Devonport is owned by a good-looking bloke with a grey plait, who rides a brand-new Indian motorbike, and who seems capable of doing any and all of the slipyard jobs. He came on to the Andante for a cup of tea, and I was wiring up a 12v fan, so he whipped back to the office and grabbed his electrics bag, and soldered it for us. His staff though, deserve first prize. “Sav” is about 30, with a shaved head apart from a small mowhawk only down the back, and zebra teeth. He drives a loud, big fat ute, with an unbonneted engine and big fat wheels. He is quietly well spoken (apart from when he’s screaming invective at recalcitrant machinery). He is a fantastic sandblaster and spray painter when he’s there, but is rather catholic about punctuality, even attendance. The other main guy epitomises what drink does to a talented working man. Neither of these guys has a mortgage, or a home for that matter!

Bunbury slip was owned by the despised “Dept of Transport” but operated by the wonderful Ian McRae. A big-bellied, chain-smoking, limping, talkative guy who ran “Hav-a-chat Marine” he was generosity itself, offering his car when we were stranded. There were three chairs outside his office. One armchair was sagged almost to the ground and reeked of old cigarettes, with two or three ashtrays balanced on the arms. The other armchair was covered in the off-white hairs of the fairly dusty dingo. The visitors chair was a remnant from the laminex and chrome dining settings of the fifties. The politics of the yard was pervasive, complex and unexplained.

Albany was operated by the civilised Englishman Darren, and his efficient and hardworking off-siders. Scarcely worthy of scandalous comment.

All slipyard operators seem to suffer from boat romanticism. They have “projects” on the go, generally old neglected wooden boats, with classic lines and interesting history but heart and bank breakers.

Intolerance of bureaucracy….. just about a dead heat here. Boating, particularly commercial fishing, seems to attract hard men; and those who operate slipyards are from this mould. Minor details like OHS, residency, pollution etc are given lip service, and generally treated commonsensically, but not necessarily following every stipulation of the law.  I don’t think it would be feasible to expect otherwise.

Facilities….. Devonport has a toilet, shower, washing machine on site!!!!!! This gives it the highest accolades possible. They may be less-than-sparkling-clean; but they are available. Neither Albany nor Bunbury had any facilities at all for clients…. at Albany the nearest toilet (and cold shower) was 100m away with a warm council-operated shower 1km away. Bunbury comes last with a public toilet over 1km from the slipyard.

Grot…all slipyards have an accumulation of the toxins of ages. Sandblasting dust and crystals, paint, rust, fibreglass residue, barnacles. This shifting, blown dust gets into everything, coating sweating bodies with a patina recognisable to other boaties.

Friendship…. perhaps because of all the privations and hard work; friendship is generously offered. We’ve been honoured to have made several great friends from within the confines of the slipyards.

One thought on “Slipyards we have known…”